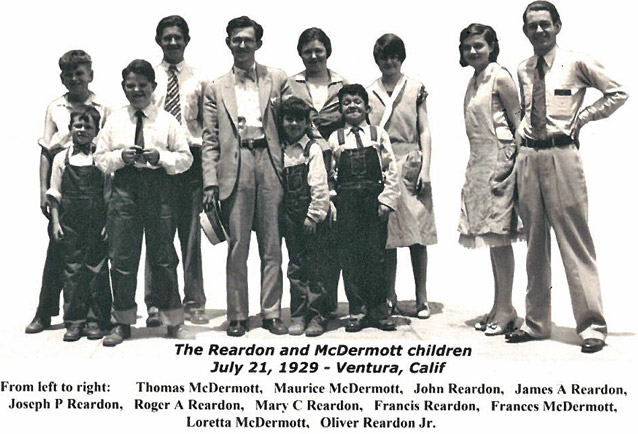 When Joseph was less than a year old his father along with his family moved from the Midwest and came to call Ventura California home. Soon after his arrival in Ventura, Mr. Oliver Reardon began what would become a continued tradition as a family-owned Mortuary for well over a Century now ; A legacy of Funeral Director's proudly serving families in Ventura County for over three generations.

Serving as the Ventura County Coroner from 1922 - 1936, Oliver Reardon continued his involvement with the concerns of the community, providing six years of dedicated service as councilman in the 1940's. Joseph Reardon, was present in the wake of the St. Francis Dam Disaster (where 425 individuals lost their lives).  He has been a part of the family heritage that is the Reardon Funeral Home since his graduation from high school in 1929.

Joseph Patrick Reardon, started as an apprentice embalmer, under his father while still in High School.  Learning his craft, thoroughly,  Joseph showed the same dedication and compassion as his father.  Regardless of the task at hand, Joseph offered his talents and focused concerns to those in need of his services.  Tirelessly dedicated to serving the entire community Joseph created high standards of excellence that have elevated the firm to it's unique position as leading ecumenical funeral home in Ventura.

In 1976 Reardon began mentoring a young Mr. Joseph H. "Jay" Ryba who began working along side Joseph and the two helped develop the reputation the funeral home enjoys today.  Joseph P. Reardon, retired a  number of years ago, but up until his death in 2006 maintained an active presence in the funeral home along with Joe Ryba assuring the high quality and care that proudly set the Reardon Funeral Home far apart from any other Funeral Directors, Mortuaries, or Cremation Providers in the area.

In 2013, Michael Boyko joined Joe Ryba in leading the firm and in continuing a tradition of service to Greater Ventura for well over one hundred years. Drawing on over 103 years of service, our fine world-class facility and our staff composed of highly professional, kind, and empathetic individuals, makes us the most preferred family owned Funeral Service and Cremation provider in our community today. In times when many local funeral homes are no longer family owned but owned and operated by huge chains and conglomerates we offer the level of compassionate care only a family can provide. We are accountable to you and your family - never to investors and stockholders.